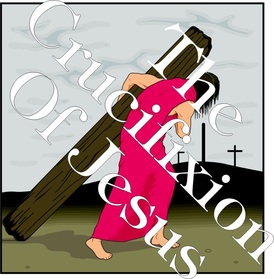 Welcome to study number six of the Bible Correspondence Course.  We appreciate you taking the time to study God's word.  It is our sincere hope you enjoy the course and that it increases your knowledge of the word of God.  We recommend that you use either the King James Version or the New King James Version as you study this course.  It is designed for use with either of these translations.

This study will begin with a discussion of the events that lead up to Christ's death.  From there we will briefly examine the crucifixion and the resurrection that followed.  Having examined the death and resurrection of Jesus, we will then look at the implications of these events.  Special attention will be given to the bearing these things had on the establishment of the kingdom.

This will set the stage for a discussion of the establishment of Christ's church.  We will study how people were admitted into the church and how you can be a part of Christ's church today.  In addition, we will contemplate what the change in kingdoms does to the law.  We will see the relevance the Old Testament has today and how the New Testament replaced the law of Moses.  With this introduction, we hope you will have a Bible in hand and read the references as we study the closing moments in Christ's life.

Events leading up to the Death of Jesus

atthew 21:1-11 records the story of Christ's final entry into Jerusalem.  The simple trip was embellished by the shouts of praise from the Jewish people.  This event fulfilled a prophesy recorded in Zechariah 9:9.  The prophesy spoke of their king coming to them riding on a donkey.  This falls in line with earlier expectations of Christ's kingdom.  Since the Jews anticipated a physical kingdom, they naturally praised their new king, Jesus.  The problem was, they didn't understand the new kingdom nor how Christ would begin the new kingdom.

Jesus was not in Jerusalem very long until his life was absorbed in controversy.  In Matthew 21:12-26 he cleansed the temple of the money changers who had perverted God's house with their dishonest dealings.  In Matthew 22:23-33 he reprimanded the Sadducees and in Matthew 23:1-39 he rebuked the Pharisees.  In just a few days his actions in standing for what is right had so infuriated his enemies, they were determined to kill him.

Luke 22:1-6 records the plot between Jewish leaders and Judas, the disciple of Christ.  At the appointed time Christ observed the Passover feast with his disciples.  After the feast he went to the garden of Gethsemane to pray.  By this time Judas had informed the Jews of where Jesus was located.  They sent a guard and arrested him that night.  [See Luke 22:8-53.]  Soon they would try him and take him to Pilate to be put to death.

The Trial and Death of Jesus

Relatively little information is given regarding the childhood of Jesus except the circumstances involving his birth.  From the time he was called out of Egypt until his baptism, little record is supplied about his life.

When Jesus was about thirty years old, he was baptized.  [See Luke 3:21-23.]  Matthew 3:13-17 provides more details of this occasions.  Jesus came to John the baptist to be baptized.  John was reluctant because he felt Jesus should baptize him.  Jesus insisted so John baptized him.

The Bible says that after his baptism, God spoke from heaven declaring that Jesus was his Son.  This alone is a remarkable testimony to the reality of Jesus, that he is Christ, the Son of God.  In Matthew 17:1-5 there is record of another instance where God spoke from heaven to declare Jesus is his son.  In II Peter 1:17-19, Peter reflected on this heavenly voice.  As grand and glorious this must have been, Peter says the prophesies Christ fulfilled are also a sure testimony to these claims.

The Resurrection of Jesus

How to Enter the Kingdom

he controversy involved in what Jesus taught eventually took its toll.  As he continued in his teaching ministry, rejection of him and his doctrine grew.  In Matthew 12:14, relatively early in the ministry of Christ, the Pharisees were already plotting how to destroy Jesus.  Christ challenged their beliefs and they responded by rejecting him.

The resistance continued to grow.  In Mark 6:1-6 we learn that people of his hometown rejected him.  Not only was disapproval intensifying in Jerusalem, it was spreading to other areas.  By the time of  the events in John 10:39 the Jews had attempted to capture Jesus but he escaped.

Luke 19:47-48 specifically connects this kind of opposition directly to Christ's teaching.  Circumstances had made it difficult for some time, but the Jews would soon succeed in capturing Jesus.  Luke 22:2 tells of their continued plotting to kill him.  This time they contracted with Judas to betray Jesus.  From this time it wouldn't be long until the increasing rejection grew into the frenzy of a mock trial with phony witnesses.  The life of Jesus would soon be brought to a cruel end.

It is important to remember that God allowed this ​rejection to endanger the life of Jesus.  It was God’s plan all along that Jesus would be rejected and put to death.  This was necessary for the salvation of man.

﻿﻿﻿﻿
In this study, we have considered the closing events of Christ's life.  We briefly reviewed his trials and fraudulent conviction at the hands of corrupt Jews and false witnesses.  His final sentencing came from the Roman ruler, Pilate.

After hours of humiliation and torture on the cross, he finally succumbed to death.  Three days later he arose from the tomb victorious over death.  The significance of this resurrection involves much more than just conquering death.  It also brought about the promised kingdom.

We learned that the church was the promised kingdom.  Christ is its king and priest.  The New Testament is its law.  The fact of Christ's priesthood necessitated a change in the law.  So at the death of Jesus, the law of Moses was done away and the law of Christ was ratified.

With a new kingdom, king and law, we may now enjoy the benefits of being in God's kingdom.  You gain admittance into that kingdom by being saved.

The Next Study will Discuss How To Be Saved