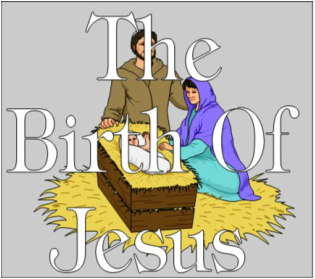 Welcome to study number five of the Bible Correspondence Course.  We appreciate you taking the time to study God's word.  It is our sincere hope you enjoy the course and that it increases your knowledge of the word of God.  We recommend that you use either the King James Version or the New King James Version as you study this course.  It is designed for use with either of these translations.

The fifth study begins with the birth of Jesus.  In it we will explore the earlier events in the  life of Jesus.  This part will focus on how his life was instrumental in bringing about the kingdom of God that the prophets anticipated.

Next we will examine his teaching on moral issues and on the kingdom.  This will lead to an examination of the growing rejection of Christ and how that set the stage for his crucifixion.  A comparison will be made between the first century rejection of Jesus and how people reject his word today.  We hope you will get your Bible and read the references while you study Christ's life.

The Birth and Infancy of Jesus

​In Matthew 2:1-6 the Bible tells of the birth of Jesus in the town of Bethlehem.  According to the previous chapter, Jesus was born of Mary who was a virgin.  She and Joseph were going to Bethlehem to pay taxes in their hometown.  When they arrived at Bethlehem there was no place of lodging available.  So rather than having all the comforts due a newborn child, Jesus' first bed was a manger, which was a feed trough.  [See Luke 2:1-11.]

After his birth the angel gave the joyous announcement, "Unto you is born a Savior, which is Christ the Lord."  Jesus lived up to the other name assigned him, Immanuel, which means "God with us".  Truly, in him, God had come to earth.  His birth was the fulfilment of Micah 5:2, which anticipated the birth of the Messiah in Bethlehem and spoke of his rulership.  Therefore, from the outset of his life, we see implications of the coming kingdom or rulership of Jesus.

The governor of Judah at this time was Herod.  Knowing the prophesy that the one born in Bethlehem was to be ruler in Israel, he sought opportunity to kill Jesus.  Matthew 2:16 tells how Herod killed all the babies in Bethlehem in this effort.  An angel of the Lord advised the family of Jesus to take the baby to Egypt and stay there until Herod was dead and it was safe to return.  [See Matthew 2:13-15.]  From the very beginning of his life, sinful man sought to kill the innocent Savior.  But his life would not end until he accomplished his mission.

Prophesies Prove Jesus is Christ
One of the most remarkable features of the life of Christ is the prophesies he fulfilled.  There are hundreds of Old Testament prophesies fulfilled in dozens of events from Christ's life.  The profound proof this supplies for the validity of Christ's claims is immeasurable.

The fact is, his birthplace is not the only circumstance at this point in his life that proves he is Christ.  Hosea 11:1 says God's son would come out of Egypt.  Matthew 2:13-15 says Jesus fulfilled this when his family brought him from Egypt after Herod's death.  But why did his family ever take him from Bethlehem to Egypt to begin with?

After Jesus was born, Herod sought opportunity to kill him.  Matthew 2:16-18 outlines how baby Jesus escaped that massacre when his family took him to Egypt.  This massacre fulfills the prophesy made in Jeremiah 31:15.  So the birth of Jesus in Bethlehem allowed for the fulfilment of Micah 5:2.  It set the stage for Herod's massacre of babies that fulfilled Jeremiah 31:15.  This led to Christ's escape to Egypt and eventual return that fulfilled Hosea 11:1.

Yes, it is fair to say that many babies were born in Bethlehem.  But how many were born at the time of this massacre?  And how many escaped this massacre?  How many escapees fled to Egypt?  How many of these were later called out of Egypt only after it was safe to return?  There is only one in all history that fulfilled these three prophesies.  That, of course, is Jesus, the same Jesus that fulfilled literally hundreds more prophesies regarding the Messiah.  There can be no doubt that Jesus is the Christ, the Son of the living God!

The Childhood of Jesus

Relatively little information is given regarding the childhood of Jesus except the circumstances involving his birth.  From the time he was called out of Egypt until his baptism, little recorded information is supplied about his life.

When Jesus was about thirty years old, he was baptized.  [See Luke 3:21-23.]  Matthew 3:13-17 provides more details of this occasions.  Jesus came to John the baptist to be baptized.  John was reluctant because he felt Jesus should baptize him.  Jesus insisted, so John baptized him.

The Bible says that after his baptism, God spoke from heaven declaring that Jesus was his Son.  This alone is a remarkable testimony to the reality of Jesus as the Christ, the Son of God.  In Matthew 17:1-5 there is record of another instance where God spoke from heaven to declare Jesus is his son.  In II Peter 1:17-19, Peter reflected on this heavenly voice.  As grand and glorious this must have been, Peter says the prophesies Christ fulfilled are also a sure testimony to these claims.

There were many outstanding features in the teaching of Jesus.  Few were neutral regarding the things he said.  His message was so unique and compelling that most people either rejected it or followed him completely.  He taught a message about his spiritual kingdom that was hard for Jews to accept.  His teaching on moral issues was so controversial that many today still categorically reject it.

The kingdom of which Jesus spoke was established in the first century.  There can be no doubt about this fact.  In Matthew 4:17 when Jesus first began to preach, he clearly stated the kingdom was nearby.  In Mark 9:1 he went as far as to say that some of those people would live to see the kingdom established.

Of course the kingdom of which Jesus was speaking was not a physical nation.  He was talking about a spiritual kingdom.  [See John 18:36.]  The Jews had a difficult time accepting this since their expectation was of a physical kingdom.  This is reflected in situations like Luke 17:20-21 where Jesus had to explain that the kingdom was not going to be established in such a physical way.

Christ's teaching on moral issues and daily living was just as hard for many to receive.  Several times he silenced the religious leaders of his day with superior answers to their objections.  He often scorned the standards of the day as unacceptable.

One such occasion was what is commonly called the sermon on the mount.  It is recorded in Matthew 5-7.  In this sermon he brought to their attention what was commonly believed about several issues.  He then refuted these standards while offering in their place God's values and principles.  He scolded the religious leaders of the day for their pomp and haughtiness.  On other occasions, such as Matthew 23, he scolded the Pharisees for their sin and hypocrisy.

Though Jesus is commonly perceived as accepting every one just as they are, his instruction shows otherwise.  He did not accept people as they were!  He demanded that people repent.  [See Luke 13:3.]  He condemned those with religious error as lost, though they didn't know it.  [See Matthew 7:21-23.]  Rather than excusing immorality, he contended that it defiles a person.  [See Mark 7:20-23.]  Jesus upheld a high standard of morals for daily living.  He condemned those who did not live by the standards set forth in God’s law.

Outline of the Sermon on the Mount

﻿﻿﻿
This study began with a discussion of the birth of Christ.  This included an examination of the failed attempt of Herod to kill Jesus.  After following his escape to Egypt and eventual return, we studied three prophesies he fulfilled in his birth.  The way his story unfolds and the prophesies are fulfilled provides an excellent testimony to the validity of Jesus.

We examined the sketchy information supplied regarding the youth of Jesus.  He labored as a carpenter as did his stepfather Joseph.  When he was twelve years old, he briefly left the company of his family to dispute with experts in the law.  He explained the episode by stating his mission to be about God's business.

Not much else is known of Christ's early years.  The New Testament record resumes a discussion of his life at the point of his baptism.  The Bible says he was about thirty years old at this point, which marked the beginning of his ministry.

Christ clarified the nature of his expected kingdom.  He plainly declared it was spiritual in nature and would be established in the first century.  Besides this kingdom theme, his ministry was characterized by strong teaching on moral issues.  The Jews rejected Christ for his teaching.  As time passed, the intensity of the opposition increased.  Finally the Jews succeeded in devising a plot that would result in the death of Jesus.