​Welcome to the Bible Correspondence Course.  We appreciate you taking the time to study God’s word.  It is our sincere hope you enjoy the course and that it increases your knowledge of the word of God.  We recommend that you use either the King James Version or the New King James Version as you study this course.  It is designed for use with either of these translations.

This second study starts with the flood and continues through the Israelite captivity in Egypt to the end of the Patriarchal Age.  A great deal will be said about the flood and what it teaches us regarding the validity of the Bible.  We will also notice an important lesson in obedience as demonstrated by Noah.

Following this, we will see how Israel became a nation, how they wound up in captivity in the land of Egypt and how God delivered them from that captivity.  We encourage you to study this course with Bible in hand.  We hope you will read all the references as you read these articles.

The story of the flood 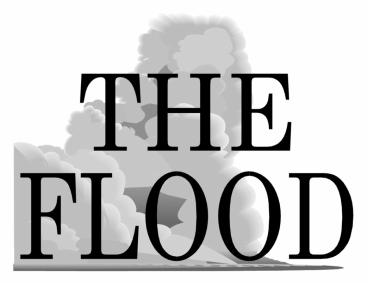 ​From the time that Adam and Eve brought sin into the world until the time of the flood, it seems that the world was getting increasingly wicked.  In Genesis 6:5-8 the Bible talks about the increasing wickedness of humankind and God’s decision to destroy man with a flood.

However, there was an upright man in that generation named Noah.  God in his grace decided to save Noah from the great flood.  So in time he gave Noah a plan for building an ark.  In Genesis 6:13-22 we find record of these instructions.  God told Noah the exact dimensions, the material to use and other design particulars.

Noah was faithful in constructing the ark exactly as God told him.  It probably took him about one-hundred years to build the ark.  We believe this because in Genesis 5:32, close to the time he was told to build the ark, Noah was five-hundred years old.  Genesis 7:6 says he was six-hundred when the flood came.  Of course this is a difference of one-hundred years.  Additionally, in Genesis 6:3 God said the destruction of the earth would come in another one-hundred and twenty years.  This seems to be close to the time he told Noah of the coming flood which renders the same approximate time of preparation.

When the time came, God told Noah and his family to come into the ark.  Shortly after that time, God caused great rains and natural disaster to produce a worldwide flood.  [See Genesis 7:1-24]  After the water level declined, Noah and his family left the ark and returned to dry land.  In Genesis 8:18-22 the Bible says they went out and made a sacrifice to God.  From this time God promised he would never again destroy the earth with a flood.  In Genesis 9:9-17 God said he would cause a rainbow to form in the clouds as a symbol of this promise.

The Flood and the Validity of the Bible

After the flood, Noah and his family went out to repopulate the earth.  [See Genesis 9:1]  As their families grew, they began to build a city and a great tower that was to reach heaven.  Genesis 11:1-9 tells the story of this project.

​God saw the potential of man was limitless.  To diminish humanity’s foolish ambitions, God decided to confound their languages and split them into different nationalities.  They scattered to different regions of the earth.  This produced the cultural and national diversity we have today.

Noah’s three sons; Shem, Ham and Japheth became the forerunners of the different nationalities of people.  Their descendants can be
​traced down to the beginning of many nations known today.  Whereas people tend to see these as different races of people, God sees all humanity as part of one race; the human race.  In Acts 17:26 the Bible says all of humanity is descended of one blood.  All people today; Black, white, red, yellow, brown or any other kind, are of the common ancestry of Noah.
​

The Promise to Abraham

One of the families to result from the descendants of Shem was that of Abraham.  God chose Abraham to receive a special promise.  There were three basic promises recorded in Genesis 12:1-3 and Genesis 13:14-15.  God promised to give to the offspring of Abraham a certain area of land.  He promised to make them into a great nation.  And he promised that in the seed of Abraham all nations of the earth would be blessed.  In Galatians 3:16 Paul tells us the seed promise referred to Christ.

In Genesis 21:1-5 Abraham and Sarah had their son Isaac.  Abraham had another son named Ishmael who was older.  He was by Sarah’s handmaid Hagar.  Because he was born of Hagar and not Sarah, the promise was not conferred to him.  The promise pertained to the one who would be the child of Abraham with Sarah.  [See Genesis 17:16-21]  Therefore, the blessing was passed down to Isaac and not Ishmael.

Genesis 25:21-26 tells of the birth of Jacob and Esau.  Although Esau was older, he sold his birthright to Jacob.  [See Genesis 25:29-34]  Because of this Jacob was entitled to the blessing.  In Genesis 27:26-30 Jacob tricked his father into giving him the blessing.  Although Jacob was deceitful in this matter, Esau had surrendered the birthright earlier.  So the Abrahamic blessing was rightfully bestowed to Jacob.

Jacob’s name was later changed to Israel.  [See Genesis 32:28]  When he had twelve sons, these became known as the children of Israel.  These twelve sons are listed in Genesis 35:23-26.  Their descendants would comprise the great nation that was to come from Abraham’s posterity, the nation of Israel.

​Israel and his family lived in the promised land for some time.  But the older sons were jealous of Joseph.  So they captured him and sold him into slavery in Egypt.  While in Egypt, Joseph served in Potiphar’s house.  He was very faithful to his master.  But Potiphar’s wife falsely accused him of attempting to commit adultery.  In response, Potiphar had him thrown in prison.

While in prison, Joseph interpreted dreams for Pharaoh’s butler and baker.  When Pharaoh had disturbing dreams, he was told of Joseph’s ability to interpret dreams.  He sent for Joseph.  Joseph interpreted his dreams that involved a prophecy of seven years of plentiful harvest followed by seven years of famine.  Because his interpretation helped Egypt to prepare for this disaster, Joseph was exalted and made a leader in Egypt.  This portion of the story is recorded in Genesis 37-40.

In the process of time Israel’s family began to feel the effects of the famine.  When the time came for them to go to Egypt and bargain for food, the sons of Israel negotiated with their brother Joseph.  Eventually Joseph identified himself as their brother.  He then sent for his father and the rest of the family.  The children of Israel were given a home in Egypt in the fertile land of Goshen.  This information can be found in Genesis 41-46.

As time passed, the older generations died.  The Egyptians became displeased with the growing Israelite family living in their land.  Exodus 1:7-14 tells of the cruelty with which the Israelites were forced to serve.

God understood their affliction and raised up Moses, an Israelite of the family of Levi, to deliver them from Egyptian bondage.  Exodus 2:1-15 speaks of the early life of Moses.  We learn that Moses killed an Egyptian and was forced to flee from the land of Egypt.  In Exodus 3:1-10 God spoke to Moses from a burning bush and told him how the Israelites would be delivered from their slavery.  Exodus 7-12 tells how God empowered Moses to bring ten plagues against the Egyptians to obtain the release of the nation of Israel.  After their release the armies of Egypt pursued them up to the shores of the Red Sea.  Moses stretched his hand over the water, and the power of God parted the waters.  After the Israelites crossed safely to the other side God caused the water to cover the Egyptian army.

From this point they traveled down the Sinai peninsula and camped at Mount Sinai.  [See Exodus 19:1-2]  At this mountain a special law would be given that would guide God’s people for several centuries.  It would stand until the time that the seed promise came and Christ fulfilled his mission on Earth.

After the flood humankind began to repopulate the Earth.  When they started construction of a tower that was to reach heaven, God decided to limit their abilities.  He did so by splitting them into different nations and languages.  The descendants of Noah’s sons; Shem, Ham and Japheth scattered to different parts of the Earth.

One of the descendants of Shem was Abraham.  God made a promise to him that a great nation would come from his posterity.  He promised them a certain land possession and he promised Christ would be born in Abraham’s lineage.

With this promise came the development of the nation of Israel.  In the early years they traveled to Egypt to avoid a great famine.  Eventually the Egyptians forced them to serve as slaves.  The Egyptians treated them very cruelly.  God summoned Moses to lead them out of Egyptian bondage.  After they escaped Egypt, they traveled to Mount Sinai where they would be given a great law.