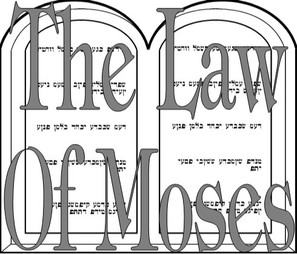 ​Welcome to study number three of the Bible Correspondence Course.  We appreciate you taking the time to study God's word.  It is our sincere hope you enjoy the course and that it increases your knowledge of the word of God.  We recommend that you use either the King James Version or the New King James Version as you study this course.  It is designed for use with either of these translations.

This study begins with a discussion of the events that took place at Mount Sinai when God gave the law through Moses.  It goes through the period of wandering in the wilderness until Israel entered the promised land and conquered its inhabitants.

It deals with a few basic principles taught in the law.  Additionally we will notice a few examples where people violated these principles.  Romans 15:4 gives us an important perspective from which to view these stories.  In it, Paul says these things are written that we might learn from them.

It is evident that the Old Testament teaches many valuable lessons that are relevant today and in any age.  In Romans 11:22 Paul reflects on the history of Israel.  He instructs Christians to take note of when God was severe with his people and when he was merciful.  A consistent pattern you should notice is that when God's people obeyed him he blessed them and when they disobeyed, he punished them.  With this in mind, please read the references as we study the Law of Moses and the early history of Israel.

The Giving of the Law

The Conquest of Canaan

After God commissioned Joshua to lead Israel, he led them across the Jordan River into the promised land.  The crossing into Canaan is recorded in Joshua 3:14-17.  For the next seven years Joshua led Israel in the conquest of this promised land.

This seven year figure is calculated as follows;  It took Israel about two years to get from Egypt to Paran where they sent out the spies.  After this, they wandered in the wilderness another thirty-eight years, totaling forty years in the wilderness.  In Joshua 14:7-10, when the conquest was complete, Joshua reflects on the events over the previous years.  He regards the sending in of the spies as forty-five years in the past.  By subtracting the last thirty-eight years of the wilderness wandering, that leaves seven years for conquest.

After the conquest, Joshua died.  From this time the leadership of Israel would be provided by a system of judges.  Acts 13:20 says they were governed by these judges for about four hundred and fifty years.  Under the judges, there were times that Israel was faithful to God and blessed with peace, and there were times they were unfaithful and cursed with affliction.  These stories are contained in the Book of Judges.

After being governed by judges for four hundred and fifty years, Israel was no longer content with God's system of government.  In I Samuel 8:1-22, we read where they demanded to have a king like all the other nations.  Although God was not pleased with their request, he allowed them to have a king.  [See Hosea 13:11]  In I Samuel 10:17-25 Samuel presented to Israel their new leader, King Saul.

Of course David was not a perfect man.  However, God saw him as a man after his own heart.  Acts 13:22 reflects upon this aspect of David's character and attributes it to the fact that he sought to fulfill all God's will.  His reign saw some good times and some bad times.  In the overview, there is no doubt his kingdom was spiritually strong because of his personal devotion to God.

When he died, his son Solomon took over the throne.  [See I Kings 2:12]  At first Solomon was a godly leader of Israel.  He was well known for his wisdom.  However, in I Kings 11:1-6 we learn that the later years of his life saw the pursuit of paganism.  Because of this, God decided that after the death of Solomon, the kingdom would be divided.  With this event came the end of the united monarchy.​

​In I Samuel 15:1-3 God commanded King Saul through the prophet Samuel to attack and utterly destroy the Amalekites.  This was God's punishment for their unprovoked attack against Israel years earlier.  [See Exodus 17:8-16.]  Bear in mind that Saul was to completely destroy all of Amalek and all their animals.

The battle went in Israel's favor, but Saul did not destroy everything as he had been commanded.  I Samuel 15:9 says he spared King Agag and the best of the animals.  God then instructed the prophet Samuel to express his displeasure to Saul.

I Samuel 15:13-23 records this exchange between Samuel and Saul.  Saul tried to defend his actions in two ways.  First, he blamed the people of Israel for taking the spoil while claiming to utterly destroy the rest.  Second, he attempted to justify the people sparing the best animals, explaining they did so to make a sacrifice to the Lord.

This gave rise to Samuel's powerful statement of a principle we must always remember.  God prefers obedience over sacrifice.  To make a sacrifice was not wrong.  But God had commanded Israel to destroy these animals.  He was more interested in them doing as he commanded than them making some sacrifice.  The lesson for us is that our obedience to the will of God is more important to him than any religious ceremony we may offer of our own invention.

Uzza and the Ark of God

I Chronicles 13:1-10 records an interesting story of something that happened during the reign of King David.  David wanted to retain possession of the ark of the covenant.  This is understandable since that was an important part of their worship.

David spoke to the people of Israel about his idea to retrieve the ark.  It seemed right in all their eyes.  So David sent Uzza and Ahio to go to Kirjathjearim to get the ark.  While bringing the ark back on a new cart, the oxen that pulled the cart stumbled.  Uzza put forth his hand to steady the ark and God killed him.

How can this be?  Why would God kill Uzza when he and Israel were trying to do what seemed to be a good work?  Were their actions wrong?  How could they be wrong when it seemed so right to everybody?

Although Israel was doing what seemed to be a good work, they were wrong.  The reason being, they were not doing it in the way God required.

The lesson for us is much like what is stated in Proverbs 14:12.  Just because something seems right to us, doesn't mean it is right.  We must search God's word to see that our actions are consistent with his will.  Or, be prepared to face the wrath of God like Uzza of long ago.

﻿
In this study we began with a discussion of the giving of the law of Moses.  A brief look was taken at the tabernacle and some particulars about worship therein.  From the example of Nadab and Abihu we learned that God was particular in their obedience to his will.  In like manner he expects us to be exacting in our obedience today.

After the law was given Israel left Sinai and traveled toward Canaan.  At the doorstep of the promised land Israel's faith was weak.  They did not trust God to deliver the land into their hands.  Because of this, God caused them to wander in the wilderness forty years.

After the wilderness wandering Joshua led Israel into the promised land.  It took them seven years to conquer the land.  From that time they were governed by judges for four-hundred and fifty years.

In time Israel became displeased with God's system of government.  No longer content with the system of judges they demanded a king.  Though this made God angry, he allowed them to have a king.

Their first king was Saul.  He reigned forty years but lost his throne because he sinned by not totally destroying the Amalekites.  When he died David took the throne.  He too reigned forty years.  His reign was clouded with some problems such as Uzza's death in retrieving the ark of God.  However, David was interested in doing God's will.  Because of this, God blessed him.

After a successful reign David died and left the kingdom to his son Solomon.  Solomon was godly at first but eventually followed pagan deities.  This displeased God so he decided to divide the kingdom after Solomon's death.