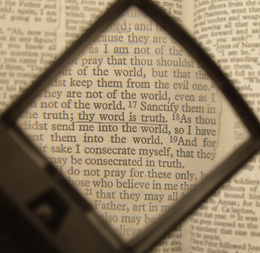 Is the Bible really reliable?  Is it a book of God's truths or is it just a book of myths and legends?  Many claim that the Bible is just the work of man and as such is no different from any other book.  But the Bible claims all its scripture is given by God. [See II Timothy 3:16-17]  Is there anything about the Bible to distinguish it as a unique book, the kind of book you would expect from God?

There is no doubt that the Bible is a book from God.  It was written by dozens of different people from many different lands over a period of about fifteen centuries.  In spite of all this diversity of origin, it has a consistent message and unparalleled internal agreement.  No other book in the world can boast such wonder.  Surely this indicates this book of books is from God.

Of course the Bible is a very ancient book.  Some claim that its message has been lost through the years.  However, of all ancient writings, the content of the New Testament is better documented than any other book.  Surely a book with such verified authenticity must be a book from God.

The Bible contains many prophesies of many different events from many different time perspectives.  It is the only book that has seen a consistent fulfillment of its prophesies exactly as stated.  For example, In Isaiah 44:28, 45:1
the prophet names Cyrus the Persian king as being instrumental in restoring the Jews from Babylonian captivity.  This prophesy was made in the eighth century B.C..  It was exactly fulfilled in the sixth century B.C. when Cyrus made a decree to release the Jews to return to their own land.  Another good example is in Daniel 8:20-21 where he specifically names the Greeks as being the empire that would overthrow the Medo-Persian empire.  This also was about two-hundred years before it was fulfilled.  Bear in mind, this is only a fraction of fulfilled prophesies that can be documented.

In spite of this good evidence many today ridicule the Bible.  It is claimed that science has disproved the Bible.  Of course unproven theories of science conflict with the Bible.  However, you must remember, they are unreliable and unproven.  In fact, the Bible is consistent with known facts.  For example, some foolishly claim the Bible says the earth is flat.  In reality, when ancient scientists insisted the earth was flat, Isaiah 40:22 maintained a circular earth.  While many early scientists believed the earth floated in water, in Job 26:7 the Bible declared the earth hung in the openness of space.  So the Bible is more scientifically reliable than many suppose.

Truly the Bible is an extraordinary book.  It is a book inspired by God, recorded by holy men and preserved through the ages.  It is a book that you can rely upon to tell you the truth about God, man and our relationship with God.  As such, it is worthy of your study.

The Creation of the World

The Fall of Man

When God created Adam and Eve, he put them in the Garden of Eden.  Read Genesis 2:15-17 and you will notice he gave them very basic responsibilities.  They were to take care of the garden and they were not to eat the forbidden fruit.  This was God's law for them.  Notice I John 3:4.  It says sin is defined by transgressing God's law.  Sin is not defined by what seems right to man.  It is defined by God's law.  So if they partook of the forbidden fruit, it would be sin because it was a violation of God's law.

Sin is exactly what Satan wanted Adam and Eve to do.  In Genesis 3:1-5 we find the story where Satan tempted them to sin.  He lied to them.  Whereas God had told them if they ate the forbidden fruit they would die, Satan claimed they would not die.  No wonder Jesus called Satan the father of lies.  [See John 8:44]

Upon hearing the words of Satan, Eve decided to eat the fruit.  She gave it to Adam who was there with her.  After eating the fruit they realized their nakedness.  When God came to the garden, he talked to them about what they had done.  With this rebuke he dealt out their punishment.  In Genesis 3:16-19 it says womankind would be cursed with difficulty in child birth.  Mankind would be cursed with difficulty in obtaining food.  Then death was added as a curse to all of humankind.  So just as God had promised, their eating the fruit brought death into the world.

But there was another kind of death brought upon Adam and Eve the very instant they ate of the fruit.  In Ephesians 2:1 the Bible talks about people being dead in sin.  What does it mean to be dead in sin?  In Isaiah 59:1-2 he reveals what sin does to man's relationship with God.  Sin separates man from his God.  Like physical death is the separation of the spirit from the body, so spiritual death is separation of man from God by sin.  So the very instant Adam and Eve partook of the forbidden fruit, they died spiritually.  They were separated from God by their sin.

In like manner, you are separated from God by your sin.  In Romans 5:12 Paul discusses how Adam brought sin into the world and death too.  So today you not only reap the curse of physical death, but you also face spiritual separation from God when you sin.

The story of Cain and Abel

After Adam and Eve sinned, God made them leave Eden.  In time they had their first son Cain and the second son Abel.  Their actions had brought sin and death into the world.  It wouldn't be long until these factors seriously affected their sons.

In Genesis 4:1-5 we read of Cain and Abel offering worship to God. God accepted Abel's worship but he rejected Cain's.  The verses that follow reveal that because of this Cain became jealous and killed Abel.  Why would God not accept Cain's worship?  Since God is just in his dealings with man, it couldn't be a matter of favoritism.  [See Acts 10:34]  There must have been something different in the way they offered their worship.

In Hebrews 11:4 the Bible says Abel offered his worship by faith.  What does it mean to do something by faith?  The fact that both sons were worshipping shows both believed in God.  So faith must mean something more than just belief.  Romans 10:17 says faith comes by hearing God's word.  To have faith in God means to hear his word and trust him.

Apparently this is exactly what Abel did.  At the same time, Cain didn't seem to obey God concerning worship.  I John 3:12 says that Cain's works were evil.  Remember that evil, or sin, is defined as breaking God's law.  So while Abel was trusting and obeying God, Cain was being disobedient.  We don't know what the exact violation was but we do know this is why God accepted Abel's worship but rejected Cain's.
​

What Cain and Able teach us about worship today?

It is the same for us today.  God expects us to worship him according to his word.  In Matthew 15:8-9 Jesus talked about people who offered vain worship.  Part of the problem was the fact that they were teaching for doctrines the commands of men rather than worshiping according to God's word.  The lesson for us is that we need to insure that our worship is patterned after the word of God and not after the will of man.

Summary of our study

﻿﻿Course number one began with information about the reliability of the Bible.  Since the Bible is God's word to man, it is certainly worth your time to study it.

The Bible says the earth began with God's powerful voice speaking and bringing into existence our wonderful creation.  God took six days in creating this universe.  On the last day of creation, he created man and woman.  God made us unique.  Whereas the rest of creation only knows of temporal life here on earth, humans are given an immortal soul and spirit that leave the body at death.  In this way, we have the privilege of living beyond this life.

The fact of the afterlife suggests our accountability to God.  Adam and Eve well illustrate this accountability.  God gave them a simple law in their garden home.  They broke this law when they ate the forbidden fruit.  This introduced sin and death into the world.  After this, God made them leave the garden.

When they left Eden, they started their family with the births of Cain and Abel.  Both offered worship to God but because Cain did not follow God's word, God rejected his worship.  This teaches us a great lesson about worship today.

For our worship to be acceptable to God, we must offer it according to the guidance in his word.  Any other form of worship is not acceptable.