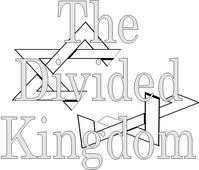 Welcome to study number four of the Bible Correspondence Course.  We appreciate you taking the time to study God's word.  It is our sincere hope you enjoy the course and that it increases your knowledge of the word of God.  We recommend that you use either the King James Version or the New King James Version as you study this course.  It is designed for use with either of these translations.

This study begins with the dividing of Israel into two kingdoms.  It will continue through the completion of Israel's history up to the time of Christ.  Some attention will be given to the spiritual degeneration of the two kingdoms and how this caused their downfall.

Following this will be an examination of how the southern kingdom was restored from captivity.  From this point examination is given to the anticipation of Christ and his kingdom during this time.  It will conclude with a brief treatment of the rise of the Roman Empire and the setting for the time of Christ.

The Dividing of the Kingdom

​I Kings 12:1 tells of when Rehoboam, David's grandson, took the throne over Israel.   When Rehoboam became king, the people of Israel approached him, demanding relief from their burdens.  Instead of giving them relief, as his father's wise men suggested, Rehoboam vowed to be even more demanding.  As God had planned, the kingdom divided.  Ten of the twelve tribes followed Jeroboam, rebelling against the family of David.  This resulted in two kingdoms:  the southern kingdom called Judah was led by Rehoboam, and the northern kingdom called Israel crowned Jeroboam their king.  This story is recorded in I Kings 12:2-16.

Much like Rehoboam set the pace for Judah, Jeroboam, Israel's first king, set their pace.  I Kings 14:7-10 tells how Jeroboam did evil in the sight of the Lord.  Unfortunately for Israel, all their kings followed in his steps to one degree or another.

After two-hundred years and nineteen kings, God became so displeased with Israel that he allowed Assyria to conquer the northern kingdom, carrying them into captivity.  This happened in about 721 B.C.  The story of Israel's fall is found in II Kings 17:3-6 and II Kings 18:9-12.

The History of Judah after the fall of Israel

While Israel fell to the Assyrians, Judah was fortunate to have Hezekiah as their king.  In II Kings 18:3-5 Hezekiah was characterized as one of the greatest kings of Judah.  Whereas the northern kingdom and prior leaders of the southern kingdom had steeped themselves in paganism, Hezekiah put away idolatry and restored proper worship.  [See II Chronicles 29, 30 & 31.]

Because of the godly leadership of Hezekiah, God spared Judah from the Assyrian's attacks.  II Kings 18:13-37 and II Kings 19 tell of Assyria's failed attempt to overthrow Judah.  In spite of this reward of divine protection, Judah slipped back into paganism following Hezekiah's death.  [See II Kings 21:2-9.]

God became understandably angry with Judah.  He decided to allow them to be conquered and carried away captive by the Babylonians.  In Jeremiah 25:9-11 we read one of the many instances where prophets of God warned Judah of their coming doom.  Finally, in about 606 B.C. the Babylonians conquered Judah and carried them away captive into the land of Babylon.  [See II Chronicles 36:1-21.]

The Story of the Young Prophet

After the nation of Israel split, the northern kingdom quickly fell into paganism.  King Jeroboam established altars of pagan worship in key locations.  I Kings 12:26-33 tells of his plan to establish idolatry in an attempt to secure his reign.

In I Kings 13 we read where God sent a young prophet out of Judah to go and condemn the pagan worship set up by Jeroboam at Bethel.  The young prophet obeyed God and traveled to Bethel to curse the altar of false worship.

The young prophet believed this lie and accepted the invitation.  This was a direct violation of the command of God.  Though the old prophet lied to him, the young prophet was still accountable to follow the instructions God had given him.  After he left the old prophet's house, a lion met him in the way and killed him.

The message for us is powerful.  Good intentions to do God's will are not enough.  We must be careful to avoid being deceived.  II Thessalonians 2:10-12 and Galatians 1:6-9 both teach us that we must love the truth and not believe those who tell us things contrary to God's word.

​After the seventy years of captivity, the Medo/Persian kingdom overthrew the Babylonians.  At this time, Judah was released and restored to their land.  II Chronicles 36:22-23 talks about Cyrus, the Persian king, and how he cooperated with Judah in helping restore them to their land.  Not only did Cyrus release the Jews, he also released the special vessels to be used in their worship.  [See Ezra 1:7-11.]  Ezra 2:64 says the initial group that returned to Judah numbered over forty-two thousand.

Upon returning they began the difficult task of rebuilding the temple, their cities and their homes.  The books of Ezra and Nehemiah deal with this reconstructive work.  Nehemiah 4:6 sums up their success and attributes it to their willingness to work.  In the face of incredible obstacles, the Jews worked together to rebuild their way of life.

This reconstruction not only involved a physical rebuilding but also a spiritual rebuilding.  Much work had to be done to reestablish their worship and to bring their personal lives back into order.  Nehemiah 8:1-8 talks about their careful study of the book of God's law to learn what they must do, information that was forgotten during their captivity.  All this reform was accomplished over a period of several years.  It involved the guidance and leadership of many prophets and governors.

As far as can be determined, the last one of these prophets was Malachi.  His is the last book in the Old Testament.  The time of his work is uncertain, but he probably prophesied around 400 B.C..  This would place his life toward the end of the Medo/Persian Empire.

From that time until the time of Christ, we have no inspired record of the happenings of God's people.  Though reliable history can fill this gap with many details, the inspired record is silent.  Consequently, some have designated this period, from Malachi to Christ, as the four hundred years of silence.

The arrival of Christ was preceded by that of John the baptist.  Matthew 3:1-3 tells how John came preaching the coming of God's kingdom and preparing the way for Christ's personal ministry.  By making mention of Caesar Augustus, Luke 2:1 reveals the ministries of John and Christ came at the time of the Roman Empire.  This fact has a direct bearing on Daniel's prophesy of God's kingdom and when that was fulfilled.

Nebuchadnezar’s Dream and Daniel’s Prophesy Of The Coming Kingdoms

This curious dream served as a prophesy of the struggles among different nations up to the time of Christ.  It not only foretold the nations that would come to power.  It also spoke of the coming kingdom of God.  The four sections of the image represent four successive world kingdoms.  The stone represents God's kingdom.

The fourth kingdom must be the Roman Empire since they overtook the Grecian Empire.  The iron stands for the strength of that great empire.  The iron mingled with clay stands for their vulnerabilities in being mixed among so many nations.  It is in the days of this kingdom the Bible says the kingdom of God would come.

In this study we discussed the particulars of how the kingdom of Israel was divided.  We explored the respective directions the two divisions took.  Every king of the northern kingdom pursued idolatry without exception.  Some kings of the southern followed these idolatrous ways but some were zealously faithful to God.

​The story of the young prophet illustrates Israel's practice of false religion.  It also tells of a man who was determined to do the will of God.  However, he was deceived by an older prophet and led into disobedience.  His disobedience was not the product of a rebellious heart.  It was the result of a man believing a lie instead of remaining steadfast to what God had told him.

As time passed Israel grew increasingly wicked.  Finally God gave them over to the Assyrians who in about 721 B.C. carried them away into captivity.  Judah held faithful for a while but eventually they degenerated deeper into idolatry.  In about 606 B.C. God  allowed them to be carried away captive into the land of Babylon.

After seventy years of captivity, Judah was restored to their homeland.  God put it in the heart of the Persian king to help Judah in their reconstructive work.  By about 400 B.C. the last known prophet, Malachi, did his work.  From that time until the time of Christ there is no known inspired record of the history of God's people.

God's silence was broken by the appearance of John the baptist and Jesus during the time of the Roman Empire.  As John prepared the way for Christ's ministry, he preached the coming of God's kingdom.  This falls in line with Daniel's expectation of God's kingdom in the days of the Roman Empire.  Daniel interpreted Nebuchadnezar's dream and unfolded of prophesy of four major world kingdoms and the coming of God's kingdom.  It appears that the life of Christ was instrumental in bringing about that kingdom.